Kapture: The Wristband That Records Audio

If you’ve ever wished you could play back the last 60 seconds of a presentation, conversation with friends, or that brainstorming session you were just having with a coworker, you may want to check out the Kapture wristband. Founded in Cincinnati, Ohio, Kapture successfully funded its Kickstarter campaign at the end of 2013, raising over $160,000 from backers. 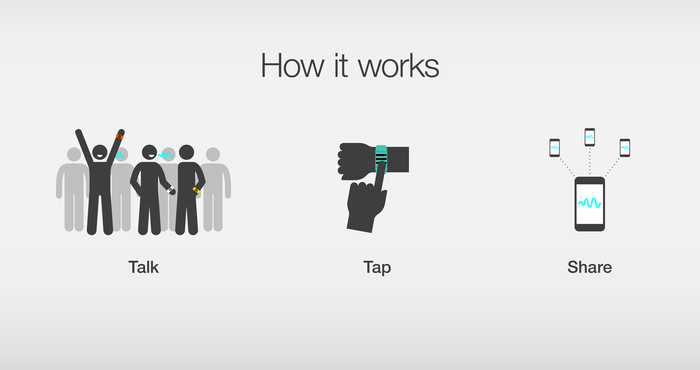 Through a simple tap of the wristband, Kapture allows you to record the last 60 seconds of audio. The wristband and its omni-directional microphone are always on, thus allowing users to be completely in the moment without the need to set up any recording equipment or apps to capture a conversation. According to founders Mike Sarrow and Matt Dooley, it is precisely for this need of spontaneous, in-the-moment audio capturing that Kapture was born.

As the wristband buffers audio on a continuous 60 second loop, the wearers of the wristband simply tap the microphone grill when they deem the last up-to 60 seconds worthy of being recorded. Once tapped, the device saves the file and sends it the users’ smartphone via their Kapture App. The wristband gently vibrates after up to 10 seconds to let the user know that the clip was successfully saved. If the wearer happens to be away from their smartphone, the device can store up to 25 second clips locally. These clips will be uploaded to the app once back in range of the user’s phone. In the app, the file can be shortened, named, tagged, filtered, and shared via text, email, or social channels.

The wristband is currently available on pre-tail for $99. It is available in six colors, though customers can purchase exchangeable microphone grills  and wristbands for an additional $15. The device can also be worn as a clip on, and is available for the same price of $99. Two premium models in chrome and gold are also available for $199 and $299, respectively.

The post Kapture: The Wristband That Records Audio appeared first on Wearables.com.